By registering with us, you'll be able to try our free CSGO Cheat or to buy the premium!

New Loader and bans that were caused

Status
Not open for further replies.

Hafiz said:
Banned by overwatch or VAC?
Click to expand...

my both acc have vac & overwatch

the third acc only have overwatch
S

NovaHvH said:
The reason people belive Project infinity got detected is because some people on youtube with subs told them so. Ive used the cheat for about a month now and i completly love it. Its super easy to use and i love how you guys support the community. From who survived the banning i would say the cheat is amazing and people should try it out. Keep up the good work!
Click to expand...

Don't take me wrong but I got banned after a month. Overwatch Ban. So......... new account and download this again..
L

Hafiz said:
Are you using portable HDD or USB pindrive?
Click to expand...

A USB, but I already got it with ImDisk, it's so easy.

doesn't work for me
R

"unable to perfume cURL request: Failure when receiving data from the peer"
WHAT WRONG?
B

I got banned but bought another account because it is a great product. I'll learn from my mistakes -_-
S

from the bans that were caused
D

I got banned, Lost three accounts

iTz_GNERAL said:
overwatch or vac
cuz impossible to get vac ban maybe overwatch
Make sure you use usb for more scure
Click to expand...

it was possible to get vac by the loader security breach. but currently it is not possible. but an overwatch ban can turn into a vac ban after awhile

inc said:
Because people keep thinking that our cheat has been detected or that the cheat is going downhill, I've decided to make a small announcement of what has been happening since the new loader has been released.

As many of you know the old loader closed after an update and used a new random process to inject so Steam wouldn't be able to backtrace it to our loader. Writing the new loader I didn't implement this thinking it would be just fine. I thought wrong. Bans were caused and I took care of it immediately. I took the server down for 4 hours and worked on it for 4 hours. Since the loader injects via a new random process again.
When we released that update back then we've recommended to use the loader on a USB drive and remove it before starting Steam again. This time we didn't do that. That most likely explains why people were still getting random bans apart from it being delayed in some cases.

Now the past few days I was hunting for any other possible flaws. I did find one which is far stretched but could've possibly in a very rare case cause a ban. It's very unlikely, but nonetheless, I've fixed it.

Because our most important concern is security for you guys, I've decided to make the loader a bit more intrusive and force users to use a removable device such as a USB drive. From today you'll be greeted with this message if your loader is not run on a removable device: 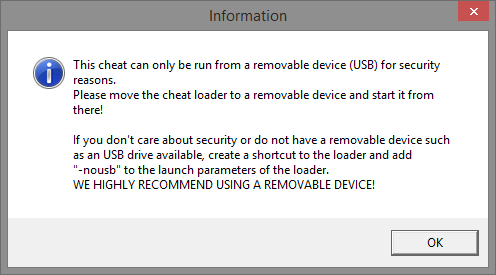 You will have to remove the USB drive when the loader tells you to. We highly recommend not putting it back in, while Steam is still opened. When you're done cheating, close Steam. Put the USB drive back in and then start Steam again. This is just for your security. We just recommend it.

If you truly do not have a removable device you can use for this purpose, we recommend using ImDisk to emulate a USB drive and remove that virtual USB drive once the loader tells you to.
A link to ImDisk can be found >HERE<

And if you truly don't care about security or can't be bothered at all with this, you can create a shortcut to the loader in windows and add the launch parameter "-nousb" and start the loader with that shortcut. This will bypass the check whether the loader is running on a USB drive or not.
That way you can also disable the closing of Steam and other related processes by adding "-insecure". 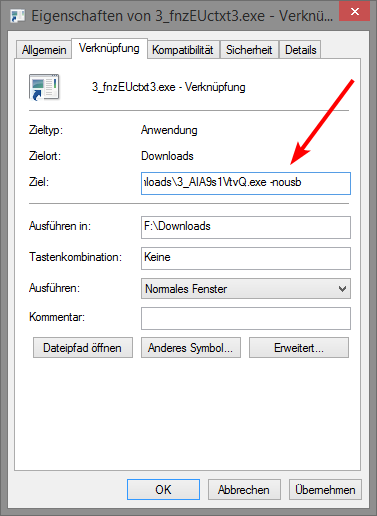 No closing Steam and other processes example: 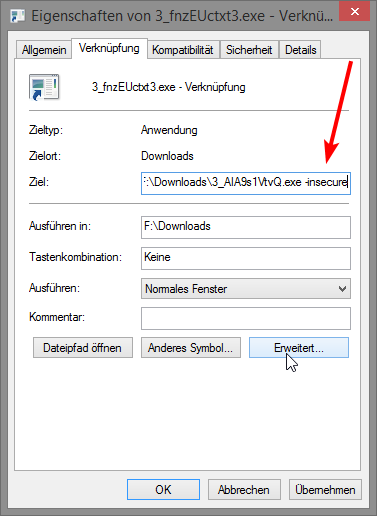 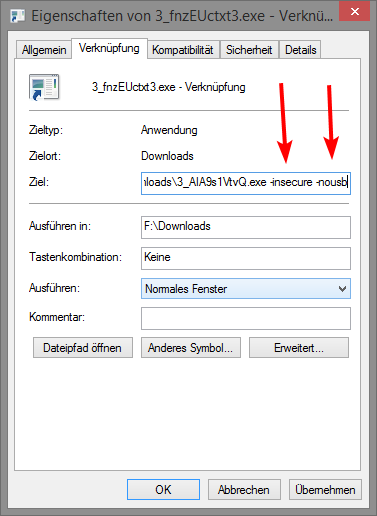 Hey im still confused on the USB part on after cheating.. so after cheating I just close my game and close steam? or how does it work
D

Tqyo said:
it was possible to get vac by the loader security breach. but currently it is not possible. but an overwatch ban can turn into a vac ban after awhile
Click to expand...

VAC not overwatch, If u request I can send u the link and screen shot as well

Dimitriopk said:
VAC not overwatch, If u request I can send u the link and screen shot as well
Click to expand...

How to attach pic over here plz help. It is further requested that when I load cheat CS GO get crashed

Dimitriopk said:
How to attach pic over here plz help. It is further requested that when I load cheat CS GO get crashed
Click to expand...

when creating the post press CRTL + P. i need the profile link and an ingame screenshot of the ban message

Are people still getting banned with this cheat? I lost 2 accounts

Status
Not open for further replies.

Project: Infinity is a CS:GO cheat provider which focuses on features, design and security for our members. Our premium CS:GO cheat and our free CS:GO cheat have never been detected.